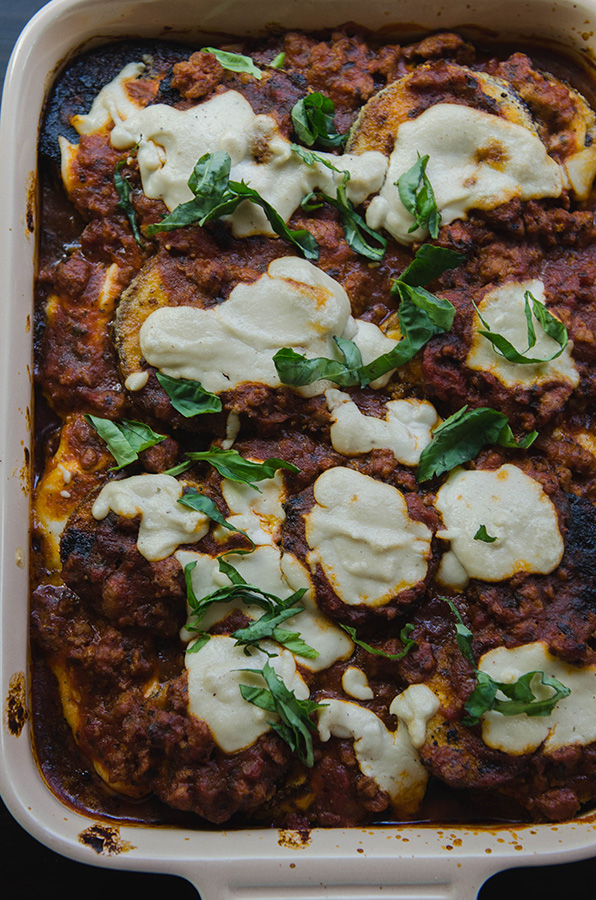 I might be having a bit of an existential crisis. I made an entire pan of eggplant parmesan without any actual cheese. And I liked it. A lot. In fact, not only did I not use actual cheese, I manufactured cheese out of nuts. Yup. Nut cheese. I’m still in the middle of a Whole30, which means no dairy for this girl. Enter the cashews.

There are several things I’ve been highly suspicious of in my life, and the culinary term “nut cheese” is definitely on that list. I mean, could it sound any less appetizing? It’s up there with bellybutton lint. Not something you want on top of your pasta. Or, anywhere near the kitchen for that matter. Just, no. But here I am, manufacturing cheese out of cashews. Nutting up a pan of eggplant parm, and trying to convince you that this recipe is so gosh darn good that I considered licking the pan. My husband, a fellow member of team “WHY WOULD THEY CALL IT NUT CHEESE?!” also couldn’t get enough of this stuff. So, in conclusion I think we can agree that the term “nut cheese” is totally gross, but we should put skepticism aside in order to make large pans of dairy-free comfort food. 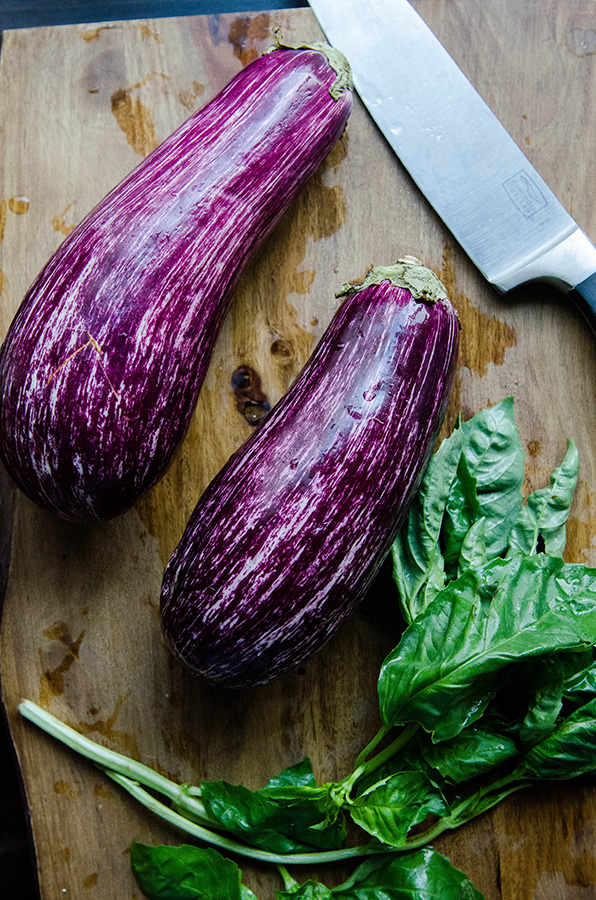 Eggplant parm was one of the first “fancy” recipes that I learned how to make when I was a kid. It was reserved for special occasions since life was too busy to be frying that much eggplant on the reg. But, my goodness, it was delish and always felt special. A huge pan of breaded eggplant covered with wine-laden red sauce and tons of cheese. The cheese would bubble and get crispy on the corners. My mouth is watering just thinking about it. 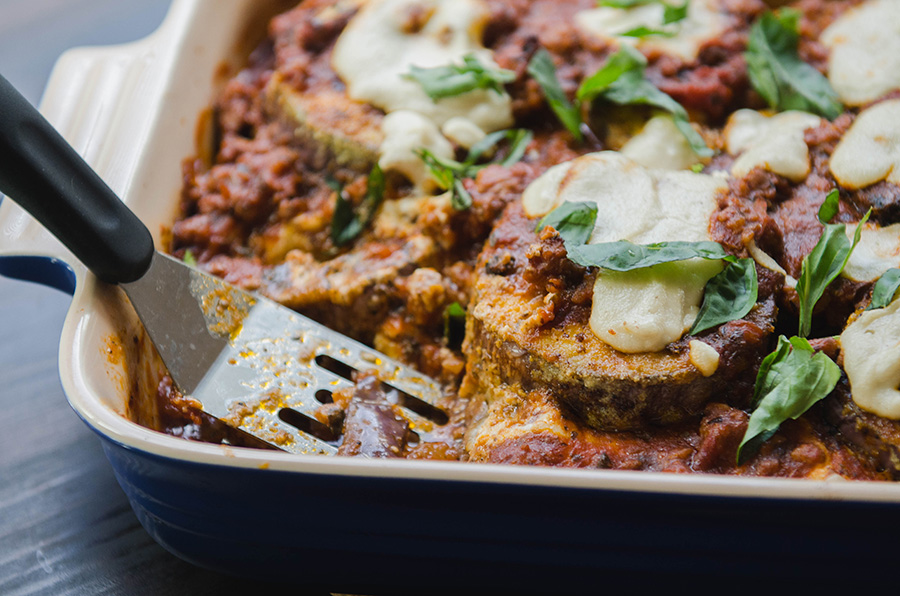 I wanted to create a recipe that captured the same flavors without the traditional use of breadcrumbs or cheese. I was highly skeptical that this recipe would work out… I’ll just say it. I mean, how good could a pan of Italian food slathered in nut cheese be? At best, I thought this would be something I would eat in private and never tell my Italian Grandmother about. She wouldn’t need to know that I did this. I don’t need to tell my father. He doesn’t need to feel that kind of shame. But, YOU GUYS. It’s good. Like, I’d make this for my grandmother. I would feed this to my father and then break the news to him that he had a mouthful of nut cheese. I’M NOT KIDDING. I’M FREAKING OUT. SO MANY CAPS. ERMAGHERD. Oh, did I mention that I’m including some substitutions in the recipe notes to make this recipe vegan? Because, I totally like you even if you don’t like pork. High five. 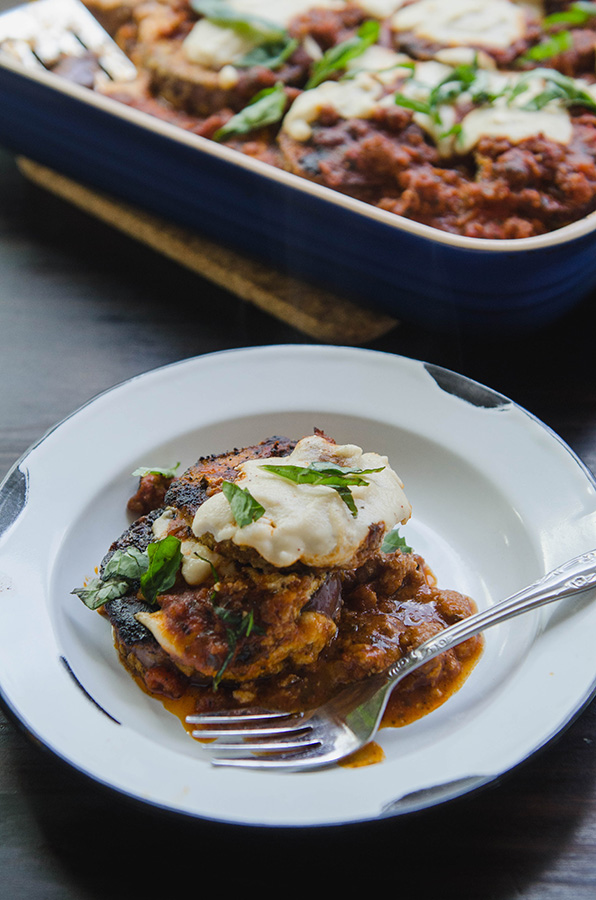 I know that it’s not typical to make eggplant parm with a meat sauce, but I couldn’t resist. It’s extra savory and hearty, and perfect for this cold winter weather. I really hope you enjoy this pan of comfort food as much as I did. Maybe a little less, since my obsession seems to be bordering on perverted. I’m gonna go now before I make anymore nut cheese jokes. It’s getting cheesy. Totally nuts. Imma stop now. K-thanks.

To make this recipe vegan, make the following substitutions: Instead of eggs, use a 1/2 cup of almond milk whisked with 1 tsp. of cornstarch. Instead of pork, substitute chopped up crimini mushrooms.

PAID ENDORSEMENT DISCLOSURE: In order for me to support my blogging activities, I may receive monetary compensation or other types of remuneration for my endorsement, recommendation, testimonial and/or link to any products or services from this blog.
Gina Marie2016-01-26T20:02:34-08:00