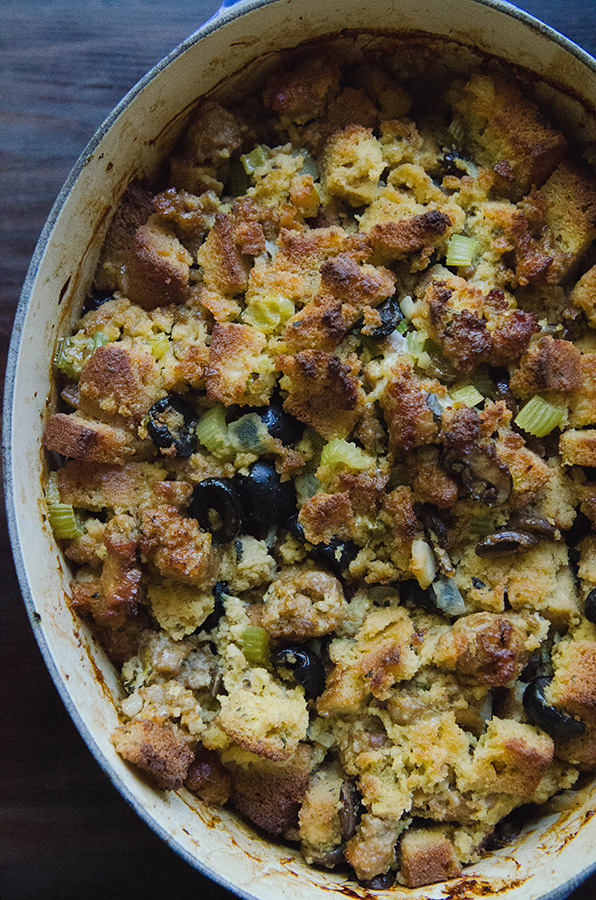 In my house, Thanksgiving is all about the stuffing.We’re not talking that sad Stove Top cornbread stuff with mushy pieces of lackluster veggies. We’re talking my Dad’s famous stuffing– the kind of stuffing that is made with savory hunks of Italian sausage, mushrooms, celery, and flavored with an umami bomb of chicken stock, and the brine-y juices leftover in a can of olives. Oh, and butter. All the butter. 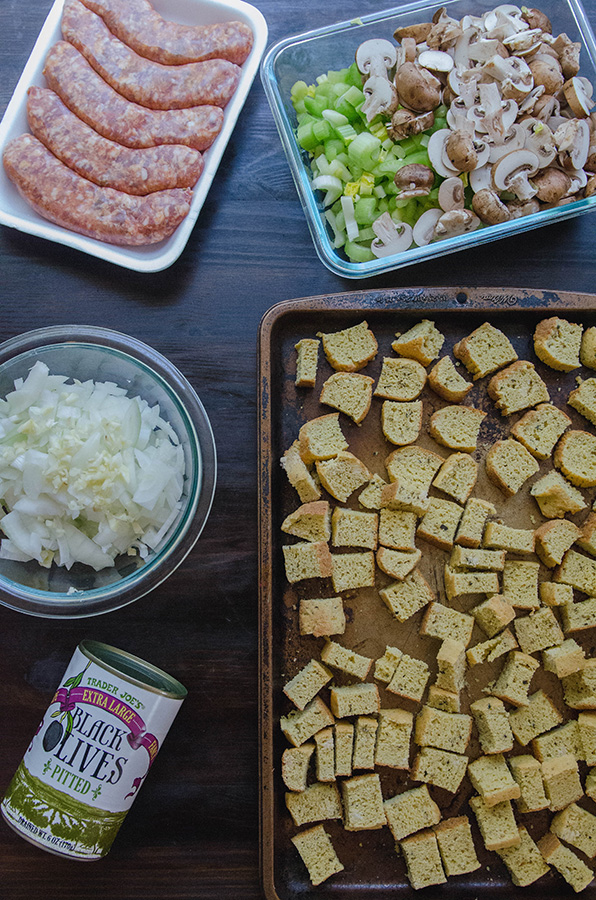 Thanksgiving morning always had a rhythm. My dad would have his coffee and then recruit us to do some chopping. It was an event. We took turns slicing celery, and olives and mushrooms. My dad would be over the stove melting enough butter to feel like we were behaving dangerously. Not every day called for this much butter, but on this day in November we would try to push the limits. Things were sauteed together. The smell of sausage and butter and mushrooms provided the world’s most delicious air freshener. He would then pour bag after bag of his Italian spiced bread mix into the pot, and soften it with chicken stock and salty olive juice. The mixture would get perfectly sticky. We’d pour it into Corningware, and lick the spoons before putting them into the sink to be washed. The rest of the day was just a race to dig into this big mound of bread-y goodness. Turkey seemed like a side dish. Gravy, a total necessity. But really, this stuffing was everything. 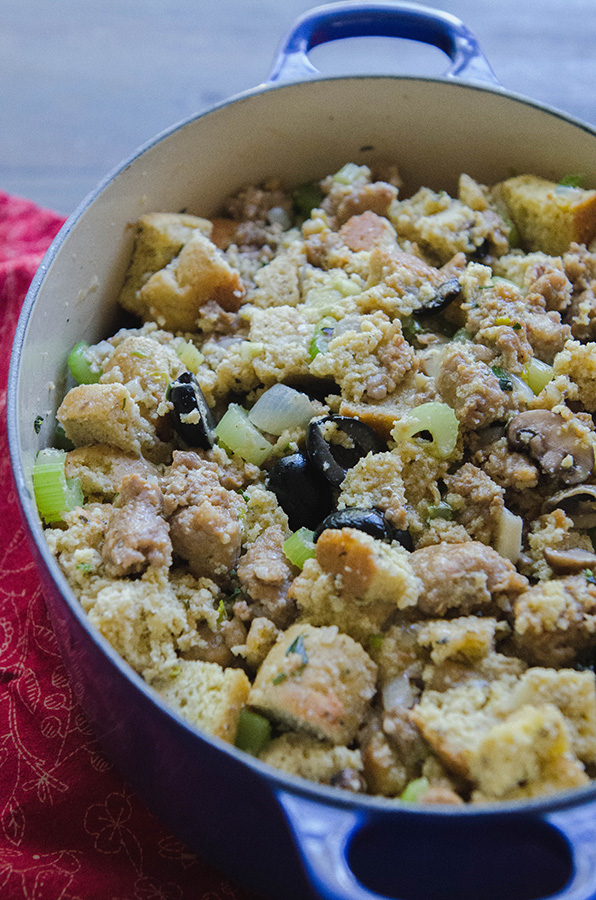 After going gluten-free, you can imagine my complete disappointment as I watched everyone dig into my dad’s coveted stuffing and I just gummed my sweet potatoes. I knew that eating it would make me feel terrible, but I was so completely tempted. Since then, there are have been multiple attempts at recreating this masterpiece while making it gluten-free. The first year my dad and I tried to make it, it was a disaster. We used too much liquid and a sad loaf of gluten-free bread that seemed to weep under the weight of the chicken stock. The whole thing jiggled in a way that is reserved for those green jell-o and pineapple numbers you allow to set in a bunt pan. I ate it. But, ugh. The next year things got a little better, and the year after that better still. By last year it was hard to differentiate between the two stuffings on the table. Huzzah. It was a case of practice makes edible. 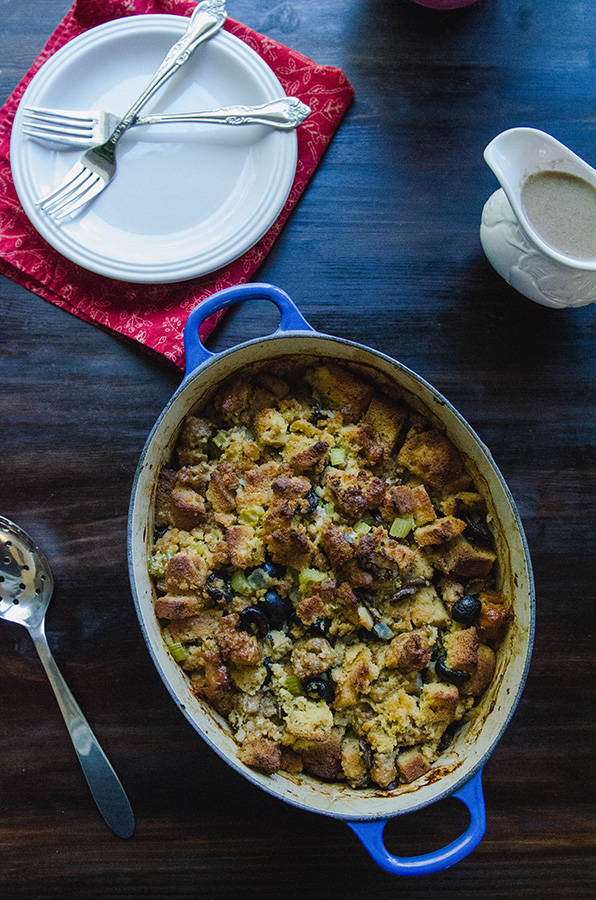 This year, I decided to go a step further and try to make the whole thing not just gluten-free, but grain-free too. I generally feel better sans-grains, so I thought if I could pull this off I might be able to eat ALL the stuffing without the inevitable feeling of having consumed a cement block. Nobody likes cement belly. I think that’s a life rule. Plus, if I can still fit into my pants after dinner, there is room for a slice of this pie. I have food goals, you guys.

I used my friend Beth’s grain-free stuffing bread as a template in my own recipe and ERMAGHERD. This. It is legit, my friends. Since the bread is made out of coconut flour, it provides the absorbency that a gluten-free stuffing has been lacking. Coconut flour is crazy absorbent. If you’ve ever used it to bake, you’ll notice the ratios of flour to eggs seem like a practical joke. Oh, a birthday cake? You just need 1/2 cup of coconut flour and approximately twenty five eggs! Just kidding. Kind of. 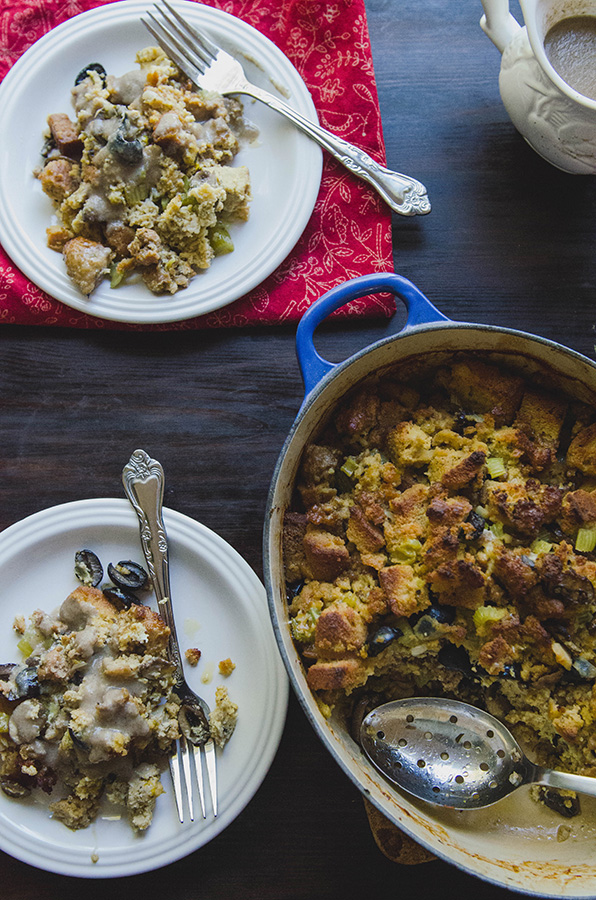 The best part? I was able to eat a huge hunk of this for dinner and not feel like total garbage afterwards. I might have even eaten it again for breakfast… and maybe again for lunch… let’s just stay I stuffed my face with all the stuffing. Stuff, stuff, stuff. Chomp. Repeat.

Note: If you’re making this stuffing, make sure you give yourself enough time. The bread has to be made a full day ahead of time in order to dry out and become stale. I like you too much not to warn you. Nobody likes a soggy stuffing mush party. Just say no to Sadsgiving, amiright? Cool.

PAID ENDORSEMENT DISCLOSURE: In order for me to support my blogging activities, I may receive monetary compensation or other types of remuneration for my endorsement, recommendation, testimonial and/or link to any products or services from this blog.
Gina Marie2015-11-17T14:01:05-08:00