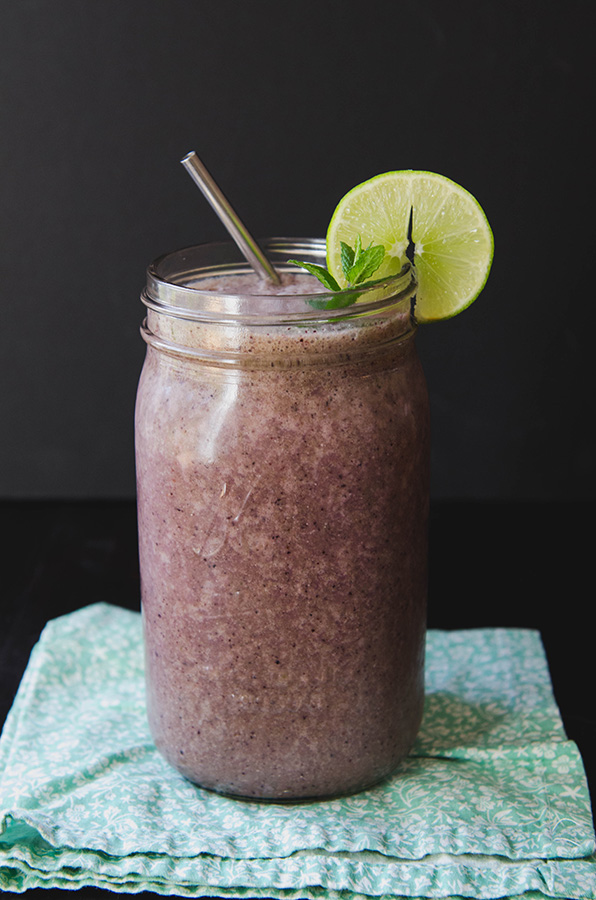 I’d love to be able to share in everyone’s fall enthusiasm. Boasting pumpkin everything, with the promise of scarves and boots and 90% less pit stains on tank tops. I’m with you guys. I would like it to rain. I would like the dusty California hills to be able to settle down with a nice cool drink of water — or vodka — whichever falls out of the sky first. But, right now it kind of feels like fall will never get here. It’s what I affectionately call “I’M-PROBABLY-GONNA-DIE-HOT” outside. Also, by affectionately, I mean dramatically — and most often peppered with choice swear words. So, here we are, clinging to the hope of fall, and forced into late summer survival mode. Also, our meals are going to be exclusively smoothies. K, thanks. 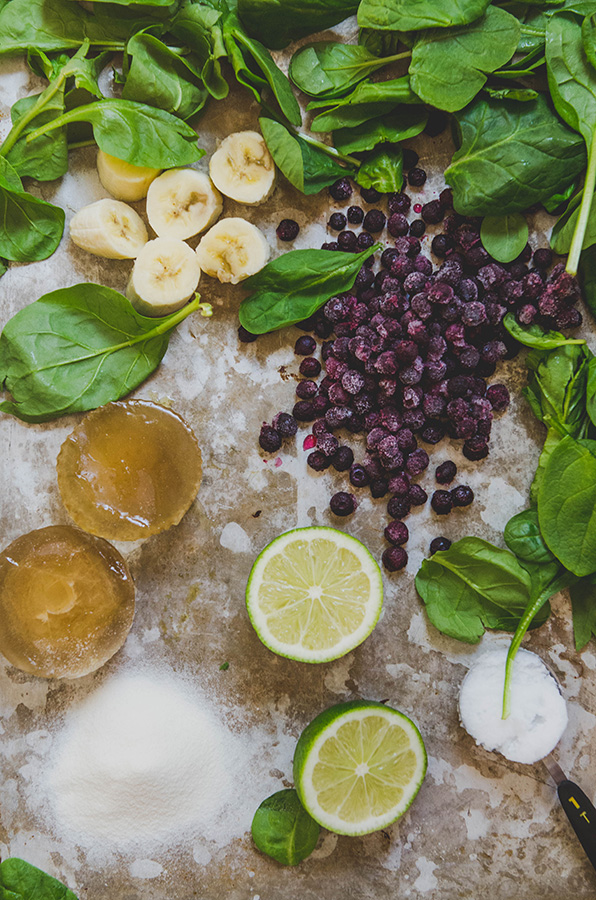 I’ve compiled a list of honest concerns along with survival tips for when it’s hopelessly hot out. See below: 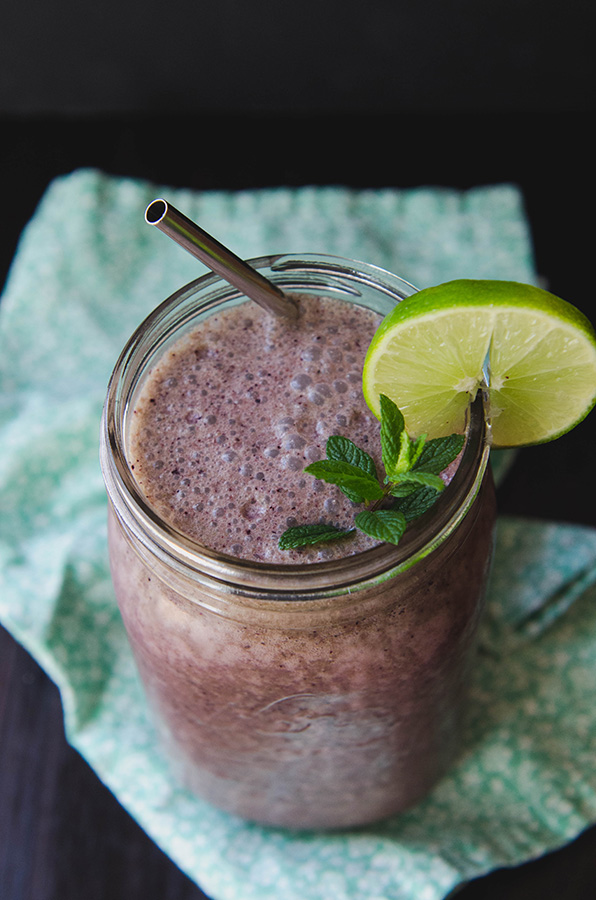 The mix of berries, lime and mint are everything. I’ll be honest, I don’t usually follow the same smoothie recipe twice. I have a frenetic relationship with my blender. We meet in the morning, frazzled and hungry. I shove the contents of my fridge, freezer and cabinets into its ready vessel, and then we blend. I guzzle. I don’t think too much about it. But, when I made this smoothie for the first time, I had it playing on repeat like an Adele song circa 2011. The secret is all in the tea. Brewing tea and then making it into ice cubes has been a smoothie game changer for me! It packs tons of flavor without much work. 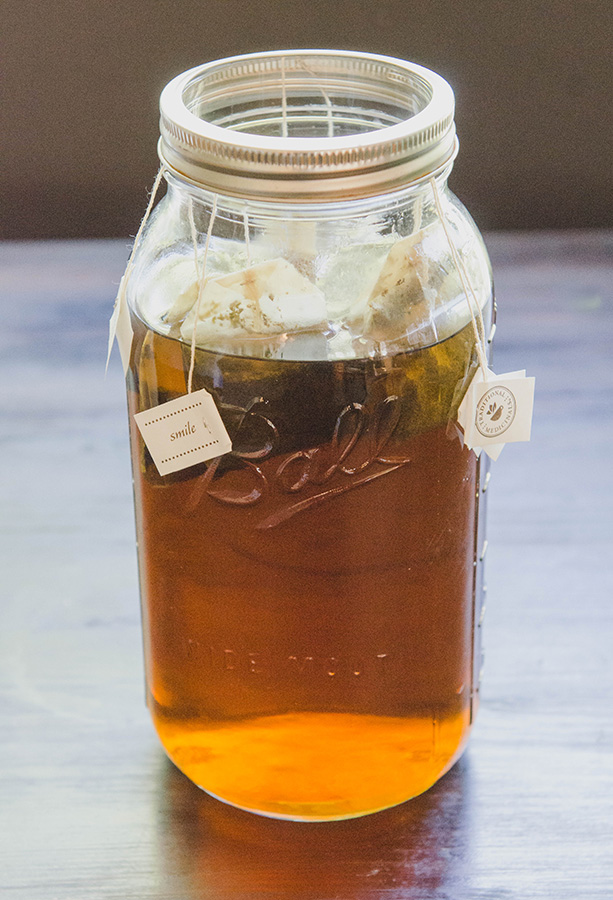 Simply brew your tea and allow it to cool on your counter-top. In this smoothie I use spearmint tea, which is very refreshing. Peppermint will work just as well if you don’t have spearmint on hand.  When the tea is cool enough, pour it into silicone cupcake liners and freeze in order to make large tea ice cubes. When it’s time to make the smoothie, simply throw in a few cubes to add that minty flavor!

Real talk: sometimes I use these minty ice cubes to liven up a glass of water. They’re not just exclusively for smoothies. One time I might have put one in my bra to see if the mint had any extra cooling effects. The jury is still out. But, as far as this smoothie goes, the verdict is NOT GUILTY. Not that it was ever on trial. Or was it? This heat has taken my reasoning skills. But, my skills for making liquid-food nutritious is still surprisingly on point. The banana provides some healthy carbs and potassium. The blueberries are probably sick of us bragging about how “superfood-y” they are, but it’s true. Spinach sneaks in there because we’re grown ups. Coconut oil gives it a boost in healthy fats, antimicrobial properties and helps us digest those greens. Collagen dissolves cleanly and without any flavor, plus it helps to heal a damaged gut, and promotes joint, hair and nail health. Spearmint tea has been shown to help with hormonal balance as well. See? We’re totally winning.

I don’t want to cut this whole thing short, but I’m pretty sure my eyebrows have effectively started to stream down my face as an act of defiance. Also, I should probably go and get my bra out of the freezer. I sincerely wish you cool vibes, and dry underarms. But, until then… SMOOTHIE UP!

PAID ENDORSEMENT DISCLOSURE: In order for me to support my blogging activities, I may receive monetary compensation or other types of remuneration for my endorsement, recommendation, testimonial and/or link to any products or services from this blog.
Gina Marie2015-09-09T21:04:50-07:00

Swipe to trim the tree with me! ♥️🎄🤗 #happyholidays @ Marin County, California https://www.instagram.com/p/CliDEiyuOX-/?igshid=YTgzYjQ4ZTY=