I always find it slightly troubling that life around you does not slow down when you do. For instance, it’s been several weeks since I actually completed my 21DSD (21 Day Sugar Detox), but I haven’t been able to write about it until now. Time did not freeze. The internet did not stop creating meme after meme. Life goes on, even when you’re laying on the couch with fevers and body aches. Somewhere in the third week of my 21DSD, I got really sick, and it set off a series of chain reactions. I got stressed out. My Lyme disease flared up in a major way. I’ve basically been spending my days trying to heal. This isn’t glamorous or particularly exciting. It looks a lot like day-sleeping on the couch and watching all the Netflix. Sounds nice, right? Just not four weeks in a row.

Breaks are always so much more fun when they aren’t mandatory. It feels nicer to take time off when you choose to, and not because it takes all the energy you have to take a shower. On the flip side, when you finally get a glimpse of a good day it makes you want to tap dance, and jazz hands, and climb up mountains and sing at the top of your lungs, and never, ever stop moving. So, I’m sitting here somewhere in between a good day and a couch day, thinking that we should catch up. Thinking that I should share with you how the rest of my 21DSD went. Thinking we should be fawning over tuna salad stuffed into mason jars. Thinking that my writing chops are rusty, but what the heck–let’s give it a go. It can’t be worse than watching Maury when you can’t find the remote (yes, this happened…SO MANY DNA TESTS). Also, remind me to go to the eye doctor. It’s getting harder to see the screen. I’m squinting, and typing so closely to the computer, it kind of resembles watching your grandmother drive a car. Nose pretty much touching the screen and/or window. I know what you’re thinking: You, Gina, are the epitome of style and effortless cool. I’ve heard that before (I haven’t). Thank you. So, let’s talk about this tuna salad. I know that shoving crap in mason jars has been happening for a very long time now. Some people are grumpy about it, and take a very pro “jars should only be used for canning” stance. I am not one of these people. If you have a husband that doesn’t like to pack a lot of veggies into his lunch because he’s basically sleepwalking out the door, and chopping veggies might mean chopping off whole fingers, I get it. This was a challenge when we were on the 21DSD. He couldn’t haphazardly throw together his normal sandwich and banana. We had to get creative. Meal prep was big. Pre-chopping veggies to have on hand was a life saver. Also, you can’t get mad at mason jars when a giant, nourishing, all-the-things-salad plops out of of it. I would make these up the night before, and they would be ready for the grabbin’ the next day. The tuna is already mixed up with mayo, but the veggies stay crisp and the lettuce sits at the top as not to get soggy. It’s a feat of modern engineering. Or, common sense. One of those. I actually have eaten this for breakfast. Don’t judge until you have a pretty mason jar salad winking at you around 8am. But, I am totally pro breakfast salad. Nothing new here. If you’re going to be embarking on your own 21DSD, or maybe you just need some healthy lunch inspo, this whole mason jar salad thing–it’s your jam. Now, let’s chat about the last two weeks of my 21DSD. I actually got emails from some of you demanding that I finish these posts. Thank you for your enthusiasm. I hope that I can dazzle you with more details than sentiments such as #NotAnotherGreenApple. If you haven’t read the first post in this series, I’d say now is as good a time as any to catch up. You can catch up here. Don’t worry, we’ll wait. I explain in detail what The 21 Day Sugar Detox is all about and I give you the run down of my first week off of sugar. Now, since it’s been a hot minute, I’m not going to do the day by day breakdown, but I will totally give you a recap of the week in total and make some suggestions of the meals and snacks that got me through. Ready? Okay! (I hope you just read that in enthusiastic cheerleader voice). Don’t forget, you can search the hashtag #SLHO21DSD on Instagram to see pictures of my meals and get inspired!

Week Two: By the time week two rolled around I started to get into a groove. I knew that I needed a good deal of protein and fat to keep me going and not crave a mess of sweets. The funny thing is, when you’re doing this program, you don’t even necessarily want sweets in the way of a giant piece of chocolate cake, but it’s more the feeling that you might give someone your first born child for a big bowl of grapes. This might be an overstatement, but still. Grapes. I really wanted grapes. On the flip side, I felt pretty good for the most part. My stomach looked like it had gone down quite a bit by the end of the second week, and my skin still remained pretty clear and soft (besides the most ridiculous zit monstrosity to ever have graced my face, as mentioned in post numero uno). One of the recipes that full on saved my life was my One Pan Crispy Chicken Legs & Brussels Sprouts! I made this same dish a couple different ways. I used bone in, skin on thighs instead of the legs. I added in butternut squash one night. Another night I added in a chopped up green apple. It was satisfying every single time. Also, I’ve said it  a million times, and i’ll say it again, it’s never a bad idea to just put guacamole on everything. Do you think it would be weird to put guacamole on my Crock-Pot Kalua Pork? Because, it’s totally not. Eating burgers? Slather them with guac. Carnitas? Dip it in a vat of guac. The 21DSD makes you take your guacamole very seriously. You’ll thank me later when you’re not weepy over a bowl of grapes. The fat will help stave off the sugar cravings. *thumbs up emoji*.

Week Three: This is where darkness descended and turned me into a bathroom dwelling troll. In other words, my stomach got cray to the cray. I don’t believe that this was from the program, but rather from a lovely stomach flu with terrible timing. My husband got it too. We were a bunch of miserable ogres trying to choke down things like salad when all we wanted was some dry toast. But, we pretty much stayed on plan. There was one day where I felt so bad and the only thing I could think to put in my body was a sandwich, so I caved, and ordered a sandwich on gluten-free bread. I didn’t feel too much of a difference since I was already in Miserableville : Population Two. I made and consumed a great deal of Roasted Beef Bone Broth during this time. I was bummed out. This was the part of the program where there was promise of feeling ALL THE ENERGY and having my digestion be on point. Instead, on day fourteen I started my lady-times (yes, I know we weren’t going to talk about this anymore… but, real life happens) fourteen days early. Insult added to injury. Someone cue the sad trombone sound effects. I got stressed out that I didn’t feel good, which lead to more not feeling good, which lead to full on Lyme flare (which I’m still trying to pull myself all the way out of). I think this is the part where I say that my results aren’t typical. I would totally recommend this program to a friend. My sugar cravings decreased. My stomach didn’t feel puffy, and went down considerably. My skin got happier. Things shifted. However, I would totally NOT recommend getting a stomach flu and/or Lyme disease. Just in case you were curious on my stance.

Did I answer your questions? Maybe not. Feel free to ask away in the comments and I will do my best for answer your 21DSD questions to the best of my ability. Also, scroll down and put tuna salad all up in a mason jar. No regrets. 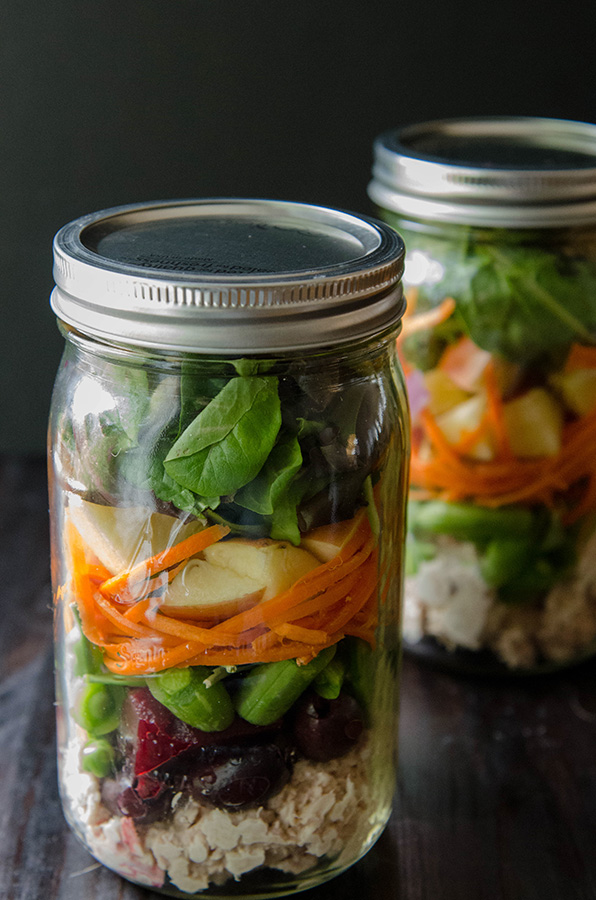 PAID ENDORSEMENT DISCLOSURE: In order for me to support my blogging activities, I may receive monetary compensation or other types of remuneration for my endorsement, recommendation, testimonial and/or link to any products or services from this blog.
Gina Marie2015-04-15T19:19:57-07:00

When 4pm still feels like 9pm and all there’s le